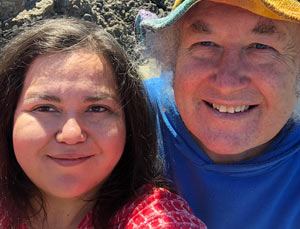 Paul is an experienced international Therapist and Published author. He specializes in Past Life Regression, which he has been practicing for over 31 years, but he is also trained in Hypnotherapy, Life Between Lives Therapy (Newton Institute), and is an experienced teacher and workshop leader. Paul has written 8 books, with more on the way. These include ‘A Seeker’s Guide to Past Lives’, and ‘Earth Warrior’. Paul is mainly based in Australia, but he has worked extensively in the UK, and also in New Zealand, Cyprus, France, Norway, Sri Lanka, Switzerland and Germany. Through his work, Paul aims to help people to an awareness of who they are as souls, to clear patterns and residues from the past, and to gain a stronger and clearer sense of their inner potential.

Dee is an Evolutionary Astrologer, who has been studying and practicing astrology for over 25 years. By applying the Evolutionary Astrology paradigm to the charts of those closest to her and witnessing the accuracy in which soul pathways were revealed, Dee saw an avenue to which aid people in their quest for self-discovery, to give an insight not only to their psyche but to their own soul purpose. Dee’s readings aim to give a richer meaning to your life through your own empowerment process. Dee believes that the answer lies in the energy bestowed and expressed in your Soul, and therefore only you have the power to release limiting patterns, and to move forward as the creative architect of your own life path.

Dee has been working closely with clients on a one on one basis, as well as facilitating workshops all over Australia, New Zealand and the UK. Dee has seven wonderful Spiritual Guides who are working closely with her for her own development and in service to others, and draws upon them for her deeply intuitive technique.